History of the Library The Georgetown Peabody Library began on September 19, 1866 by a generous gift from George Peabody. George Peabody’s interest in the town was due to the fact that it was the birthplace of his mother, Judith (Dodge) Peabody, and for many years the home of his sister, Mrs. Judith Peabody Russell Daniels, who lived at 25 East Main Street. 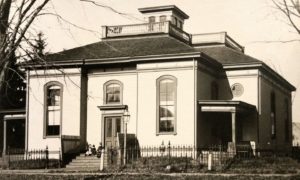 In 1866, at the laying of the cornerstone of the Peabody Memorial Church, which he donated the necessary funds to build in memory of his mother, he announced to those assembled that he was also donating the funds to establish a public library in Georgetown. Built on Library Street, directly behind the Peabody Memorial Church, the wood framed Italianate library was designed by the Boston architectural firm of Bryant & Gilman, completed in 1867, but not opened until July 3, 1869. In 1904, construction began on a new library building at Lincoln Park. Lincoln Park was deeded to the town by Milton J. Tenney and Lucy Tenney Brown in memory of their father, George J. Tenney, a Building Committee member for the first library on Library Street. The library was designed by the Boston architectural firm of Cooper & Bailey and built by contractor Edwin H. George, and was opened to the public on September 1, 1909. With town population and demand for services ever increasing over the course of the century, a library expansion was needed.

In June 2006, construction began on the library addition and renovation by Beacon Architectural Associates of Boston. This was the first expansion since 1909 and was completed in September 2007.  The new design was respectful of the original building, preserving both its interior and exterior.  The expansion allowed for a new fully accessible main entrance at ground level, expansion into the rear lawn and an interior atrium/lobby preserving the brick facade of the rotunda. With more space and updated services, the library continues to serve the many needs of the community.